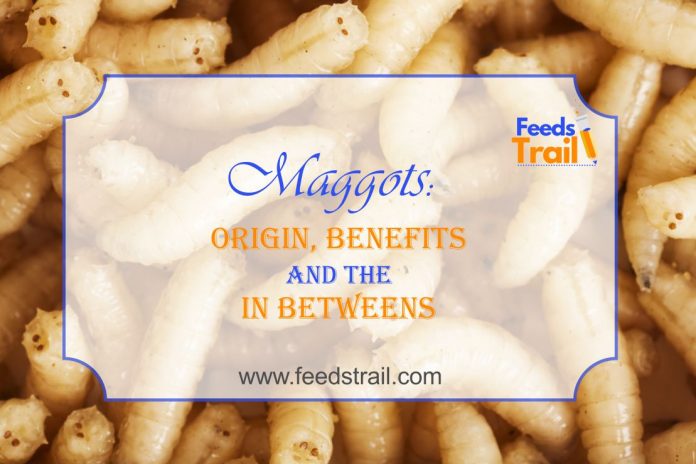 Oh and please let’s leave them there!

We’ve often (involuntarily) inhaled the putrid stench while taking a long walk on a bright sunny day, where without our knowledge the carcass of a small little animal is being devoured.

Maggots – the cute name we’ve given to the larvae of the fly’s belonging to the order Diptera are the reason behind the foul smell produced during the degradation of a dead being, or exposed food going terribly bad.

So where do these larvae – that can be described as the ‘squishy whitish-brownish –creepy-crawly legless things’ come from??????

They may seem to be appearing out of nowhere, but it’s no magic. The usually unnoticed fly swoops in and lands on the nutritious mass (animal carcass, uncovered food etc.) and the unnoticeable eggs are deposited on the surface. Approximately a day after the eggs were laid; they hatch and produce the maggots.  The maggot s(larval) stage, lasting for 3-5 days is a very important stage in the life cycle of the fly as its sole duty is to eat and eat and then eat some more. So much eating can result in only one thing – getting bigger. After 3 -5 days of continuous chomping, the maggots grow from a mere 3mm to a whopping 20mm. (1)

The larval stage itself can be divided into three sub phases. The first stage after hatching from the egg, the larvae is in the first instar stage. Consuming more food moults it into the second instar stage and subsequently to the third instar stage. (2)

Once this digestive enzymes-secreting-corpse- dissolving process of eating is done, the maggots will begin to pupate in a dry place. The process of morphing from a maggot to pupa would include forming a shell around itself. Once safely ‘cocooned’ inside the shell, the pupating maggot will use up the nutrients it absorbed and develops into the fly that buzz’s near our ear and keeps us up in the night.

What’s in it for us?

As the most selfish animal to ever populate the earth, the humans (no, not the maggots!!!) devised plans to exploit this seemingly innocent creatures. To start off with the less invasive:

• By estimating the presence and size of maggots on the dead body, a crime pathologist can predict the time of death. The growth stage of the maggots can be determined by the number of spiracles (breathing hole). (2)

• Since they are equipped with the physical capabilities to eat through the skin and flesh of the animals, the maggots (a particular kind) are used in a special kind of therapy called “maggot therapy”. This therapy is mainly used to treat pressure ulcers, venous stasis ulcers and neuropathic foot ulcers.

The strain cleared by the FDA for the use of maggot therapy in the USA is the LB-01 strain of Phaenicia (Lucilia) sericata.(3)

• And now the interesting trivia: Casu marzu – The special kind of cheese made from the milk of sheep in Sardinia Islands of the Mediterranean Sea. This cheese produced when the fermentation step is prolonged to the point of being decomposed. When the rind of the cheese is removed and the fly – Piophila casei is manually brought in to lay the eggs, the eggs hatch and produce the larvae that that break down the fats in the cheese with their digestive juices and make it  liquidy and soft ( -er than the normal cheese) (4)

Though health regulations demand this cheese be outlawed, appeals were made by the locals to declare Casu marzu as a ‘’traditional” food.

Oh, and the best part!! When disturbed, the maggots from the cheese are capable of projecting up to 15cms!!!

And the cheese is considered to be an aphrodisiac.(5)

(One day latter) Something smells weird

National Minimum Wage: Are we having the appropriate conversation?

Nigerian Doctors: The Exodus Will Be Televised