Address by H.E. Muhammadu Buhari,President of the Federal Republic of Nigeria on the Cumulative Lockdown Order of Lagos and Ogun States...
Read more
Africa

Donald Trump has been elected the 45th President of U.S. The report is conclusive as of the voting results from the US 2016 election.

With this victory, the President elect, Donald Trump promises to ‘renew the American dream’.

Many citizens of the United States and activists have dreaded Trump’s victory. A lot considered Trump’s campaign to a joke.

He was dealt tough hands by the media, the citizens of America and even foreigners. But he didn’t relent. 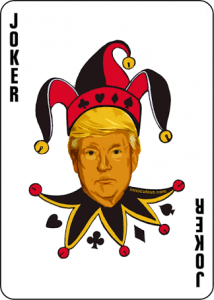 Against all odds, the once ridiculed joker, held the Trump card. It is quite the irony Donald Trump’s surname rubbed off on him at this moment.

It is a great wonder how he scaled high up against Mrs. Hillary Clinton. Looking at the trail of public blunders he’s left from the beginning of the elections campaign, the USA 2016 election results still comes as a shock to many.

The moment Clinton’s polls dropped, Trump campaign mangers siezed the small window of opportunity it gave them to up their game. They played the Trump card and now are looking at getting well paid in gratuity.

Below, is the map for the election results as Trump of the Republicans wins over the Democrats and other parties. 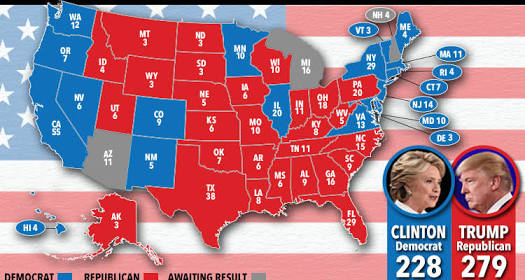 The Republicans parked a good deal as they came tops in other office too. They won the US Senate at 51 to 48 votes against the Democrats.

And then, they won the US House at 239 to 192 votes against the Democrats.

Like the graceful lady she is, Hillary Clinton gave a heart warming speech as she conceded defeat.

It’s been quite an interesting campaign this election year. Now that the results are out, all we can do is wish Donald Trump, the president elect and the people of America the very best.

More on this topic

What does it mean to vote? The first sense of the word is tied to making a choice among competing alternatives....
Read more
News

Leah Sharibu has been, for the past 463 days now, violently separated from her family by Boko Haram. Sadly, on Thursday,...
Read more
Load more

Welcome to our complete News Portal about animals, nature and environment in general. Take your time and immerse yourself in this amazing experience!